How to Series: Scout neckerchiefs now approved for wear with nonuniform clothing 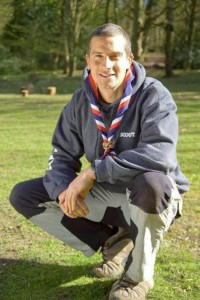 Now you can wear like Bear.  Scout neckerchiefs now approved for wear with nonuniform clothing.  How will you wear yours?  See more below:

One uniform piece unites Scouts in all 223 countries with a Scouting program.

Look at pretty much any photo of a Scout or Scout leader from another country, and you’ll see those rolled-up triangles. They’re wearing Scout neckerchiefs even if they aren’t in their full, official uniform (what we in the U.S. call the field uniform).

And now, the BSA is joining them. Scout neckerchiefs, long a symbol of the movement globally, are now approved for wear by Boy Scouts of America members whether in or out of uniform.

This line on page 12 of the Guide to Awards and Insignia, 2015 edition, confirms the change:

When engaged in Scouting activities, members may wear the neckerchief with appropriate nonuniform clothing to identify them as Scouts.

Previously, according to an earlier version of the Guide, the Scout neckerchief was “worn only with the official uniform and never with T-shirts or civilian clothing.”

What one Scouter says

Dan Kurtenbach, a Scouter from Virginia, told me by email that he’s thrilled with the move.

“The previous policy meant that you would hardly ever see a neckerchief at Scout outdoor activities, because you hardly ever see the official uniform being worn for active outdoor events,” he writes. “With this change, it seems that the Scout neckerchief can be used for what it was designed for: practical outdoor gear.

“But more importantly, it finally allows boys engaged in outdoor activities to be recognized as Scouts, not just any old youth group. It allows us to take the uniform with us wherever we go and whatever we are doing.”

Of course, your regular field uniform and activity uniforms are still an important part of delivering the BSA program.

This option — wearing neckerchiefs with civilian clothes at a Scouting event — merely offers you a nice way to show you’re a Scout when out of uniform.