Home / Boy Scouts / Charles Dahlquist on why the Church sticks with Scouting, and so does he

Charles Dahlquist on why the Church sticks with Scouting, and so does he 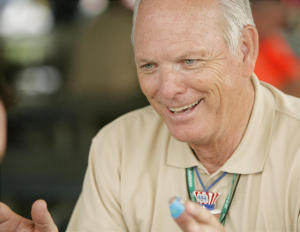 Because of my former service as Young Men General President for The Church of Jesus Christ of Latter-day Saints and my continuing association with Scouting, I am often asked, especially recently, about the relationship of Scouting and the Church.  Recently, I had that conversation with a good friend and one of my former counselors in a ward Young Men presidency, Eric Dowdle.  Many know Eric as a well-known Utah artist and “The King of Folk Art Puzzles.”  I saw Eric during our most recent annual pilgrimage to Swiss Days in Midway.  In addition to being a good friend, Eric has been a great supporter of Scouting over the years and was and is an enthusiastic youth leader.  He was obviously concerned about the future of the partnership between the LDS Church and Scouting and asked my opinion.  May I share some of the thoughts that I shared with him.  Perhaps it will help you as you may have some of the same concerns that Eric expressed to me – or know someone who does.

Eric’s first question was an obvious one:  “Is the Church going to stay with Scouting?”  And while I don’t profess to be clairvoyant or to know everything, there are a couple of things that I DO know:

First, the most recent statement by the LDS Church was a clear indication that the relationship between Scouting and the Church as a charter partner continues.  The statement given on August 26, 2015 stated in pertinent part:  “At this time, The Church of Jesus Christ of Latter-day Saints will go forward as a chartering organization of BSA, and as in the past, will appoint Scout leaders and volunteers who uphold and exemplify Church doctrine, values, and standards.”  That position (and wording) was reinforced by Young Men General President Stephen Owen at a recent gathering of Scouters from the BSA Western Region in Salt Lake City.

At least to me, it seems clear that the Church is ‘in Scouting.”  While there are some who seem to get hung up on the term “…at this time…,” that seems a little thin to me.  Those words, while not previously spoken or specifically written, have always been understood – from the very beginning.  In 1913, Scouting was approved by the First Presidency and the Council of the Twelve to be the activity program of the Aaronic Priesthood because it supported the values of the priesthood and helped young men to more fully develop the character values that would be important for them to be successful leaders in their families, in the Church, in their professions and in the community; and, in each of those roles, to more fully magnify their priesthood.  Just as importantly, as they learned leadership skills in patrols and troops, they would more fully understand the strength, impact and potential power of a priesthood quorum.

President Harold B. Lee, in a Scouting setting in June 1968, gave this wise instruction – and warning — to all involved with Scouting in the Aaronic Priesthood.

“May I say to you:  Scouting will be successful in this Church only as it relates to and maintains a definite relationship with the Aaronic Priesthood.  May I put it in a negative way and say that when Scouting fails to be the activity program for the priesthood, it will cease to be a functioning part of the Church program…The more our Church relationships representatives understand that, from the head of this Aaronic Priesthood right down to the grassroots in the wards and the stakes and the branches, the more perfectly we will begin to define that relationship and the more successful and acceptable Scouting will be.”

It has been my experience that what President Lee said nearly a half a century ago is true – and prophetic.  When local priesthood leaders get involved in the work of the Aaronic Priesthood, including Scouting, the work of the Aaronic Priesthood thrives, including Duty to God, missionary preparation, quorum service and quorum strength, individual worthiness and preparation for temple marriages.  When they do not, it normally results in a number of well-meaning parents and leaders who love the youth struggling to make the program work.

I have watched this not only on a local level, but an area level as well.  When Elder Merrill Bateman, formerly of the Presidency of the Seventy, was given the assignment to supervise the Utah Area of the Church, he asked the Young Men General Presidency and the Local Utah Scouting Councils to provide a report on what Scouting was doing to strengthen the Aaronic Priesthood and to help prepare strong missionaries; and to identify the concerns and challenges, as well as a plan to resolve those concerns.  That report and the plan were presented by the three Utah Scout Executives to Elder Bateman, who then considered the proposals and gave specific direction to strengthen Scouting and, thus, the quorums of the Aaronic Priesthood in the Utah Area.  I was interested to note that his direction was clear, compelling, inspired and included both the need to increase the training of Young Men leaders in Scouting principles, as well as steps to increase the tenure (length of service) of Young Men leaders.  As a result of his direction and focus, tenure of leaders and the level of training increased significantly.

In response to those who seem to see more in the statement of the Church than really exists, I recall that Elder LeGrand Richards once gave a talk in a setting where I was in attendance.  He said, “It has been my experience that it is wisdom to stay with the Brethren – don’t lag behind them, and don’t try to get ahead of them.”  Then, he went on to explain that many who have lagged behind the teaching and policies of the Brethren have fallen into inactivity and their testimonies of the restored Gospel have winnowed away; while those who have tried to “get a jump on the Brethren” and to anticipate where the Brethren (and the Church) were going, were languishing among those who had left the Church when the Church did not follow their suppositions and premonitions.

My second point:  I have always believed that the responsibility is on national and local Scouting leaders to provide the “best” option for the Aaronic Priesthood activity program; and on local priesthood, Young Men and Scouting leaders to implement that program in a way that impacts the lives of the rising generation – in ALL families of Scouting:  Cub Scout, Boy Scout, Varsity and Venturing.  If the program fails to meet the needs of the Aaronic Priesthood, I believe it will not be because of the strength of the program, but of the failure of leaders on both sides of the partnership in failing to fulfill their responsibilities.   Just look at Scouting today.  Its program, its leadership training (for youth and adults), its youth protection effort, its merit badge/personal growth program, and its newly revised Venturing program are more relevant to the needs of today’s youth than ever before.  It is just up to us to make it work, to get trained and work the program.  Just take a moment to look at the program aspects of Scouting – in all families of Scouting.  I personally have yet to see a better program for building youth who are prepared to face the challenges of the future than Scouting.

Finally, Eric also asked me about the wording in the Church’s statement about “…the Church will continue to evaluate and refine program options that better meet its global needs.”  While I may be missing something, again, to me that is really no change in the program or policy of the Church at all.  As I have traveled throughout the world, I have observed a significant need for a vibrant activity program for the Aaronic Priesthood outside the United States – much like we have in the United States through our partnership with Scouting.  In response to that need, in some areas of the world, Scouting units have sprung up in affiliation with LDS Church units – generally as a result of missionaries serving in those areas who have been involved in Scouting or, in the alternative, local members of the Church who have served in the United States or elsewhere where there are viable Scouting programs and who have returned to their home country and brought the Scouting program with them.

It is not surprising to me that in those areas of the Church where these Scouting programs supplement the program of the Aaronic Priesthood, the youth are, for the most part, stronger and better prepared for missionary service.  That having been said, it follows that, with more members of the Church outside the USA than inside, it is critical for the Church to develop a youth program that will meet the needs of those outside the United States and to continue to review and improve the programs inside the United States.   As I have noted in the quote by President Lee in 1969, it stands to reason that if there ever came a point, either domestically or internationally, where Scouting fails to meet the needs of the Aaronic Priesthood, it would be a time for the Church to look for another option.

As a summarizing point, in The Church of Jesus Christ of Latter-day Saints, we serve under the direction of a living prophet, who is assisted by two noble and inspired counselors and twelve members of the Council of the Twelve.  While it is true that if their direction were to point elsewhere other than Scouting as the activity program of the Aaronic Priesthood, we would follow; it follows that that is NOT their direction.  The message is clear that the over 100 year partnership between the Church and the Boy Scouts of America continues to this day to touch the lives of young men of the Aaronic Priesthood throughout those areas of the world where the Boy Scouts of America are organized.

The charge for each of us is to not fritter away our efforts trying to second guess the Brethren, but to use this time to more effectively understand this wonderful resource we have in Scouting; to become better trained than ever before, including basic and Wood Badge training; to provide appropriate financial and personnel support to Scouting; and to apply the principles we learn to strengthen the young men of the Aaronic Priesthood and their quorums.  With our young men now being able to enter the mission field at age 18, they must be better prepared in every way than ever before:  spiritually, mentally, emotionally and physically.  Scouting within the Aaronic Priesthood provides us with ideal tools, when appropriately utilized under the direction of inspired Priesthood leaders, to help prepare them for such missionary service; for temple marriage; for success in the Church, in the community and in their professions; and, in a word, for Life.  May God bless each of us that we may move ahead and use this wonderful resource to prepare the Rising Generation among us – for life, and for eternity.